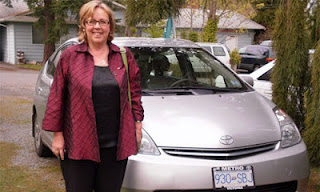 Hard to believe the Hill Times still keeps this guy on the payroll. I guess journalistic integrity isn't high on Naumetz list of priorities.His editorial has since been pulled, apparently because he quoted statements that both NDP MP Megan Leslie and Green MP Elizabeth May claimed they never made. That in itself should tell you all you need to know about the skill level this guy possesses. But it gets better. Seems Timmy tries to infer the PM's message machine blundered by renting Yamaha ATV's instead of Canadian built Bombardier's:

"Prime Minister Stephen Harper’s much-vaunted message machine blundered when they plunked him on a Japanese-made ATV to churn up and down unlikely Yukon sand dunes in one of the rarest ecosystems in North America, say opposition MPs"

So I wonder, if Timmy thinks renting japanese built ATV's for two days is a blunder, then what does that say about Elizabeth May's own personal vehicle, a japanese built Toyota Prius?

"No surprise, the leader who got left out of the debates owns a Toyota Prius. You'd hardly expect the pioneering eco party to roll up to campaign events in a Cadillac Escalade. Come to think of it, she could, given the giant Caddie SUV is offered as a hybrid. Still, the optics wouldn't be great, so she's in an Ed Begley special.

We expect she'd like a Nissan Leaf plug-in electric, or a Chevy Volt. But if she really wants to be remembered on voting day, we'd recommend the Fisker Karma. Its dual electric motors put out a total of 403 hp and it looks nothing like the mainstream crop of electric roller skates out there"

I won't hold my breath waiting for Naumetz to write an editorial about May's blunder.