Loved watching Liberal MP Kirsty Duncan squirm on Power and Politics today, trying to dismiss the Liberal's abysmal record of ghg emissions under Chretien/Martin. When pressed about the numbers, Duncan claimed the Liberals never did anything because Kyoto was signed in 1997 but not ratified until 2004.

But wait, so the position of the Liberal Party was they would do nothing about emissions unless other countries agreed to? Wait, isn't that the exact position of the Conservative government? No agreement unless countries like the U.S, China, and India also agree to ghg emission cuts?

She shoots, she scores five hole on Bob Rae.

And some fun facts: Canada's greenhouse-gas emissions rose 25 per cent between 1990 and 2005, the biggest percentage increase among G8 countries over the same time period, according to new Statistics Canada figures released Tuesday.
Posted by paulsstuff at 3:55 PM 5 comments:

Two NDP MPs need to read off paper to sing the National Anthem?

To quote NDP MP Pat Martin, it's a fuckin disgrace! 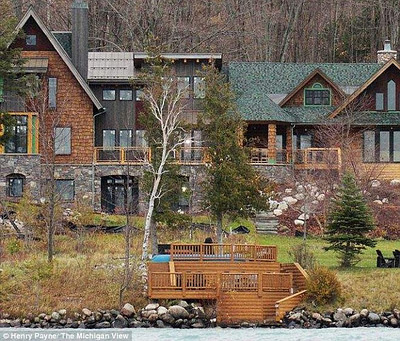 I admit to being a bit surprised to see National Newswatch actually having a link to an editorial critical of lefty Michael Moore, the guy who rallies against capitalism while counting his millions in his 10,000 square foot lakefront (summer) home. I wasn't the least bit surprised to see NNW pull the link to the story a short time after. For those who missed it here is a link to the actual story.

That's one monster of a home for a guy who thinks of himself as one of the little guys. Then again, it makes sense that someone with that big an ego would need that much space to put it in. Of course he might even be the biggest hypocrite on the planet. Wonder if his pal Al Gore drops by to roast marshmallows on the fire every now and then.

Update: NNW now has the story on the right hand bar. Well worth reading. The taxes on that summer home are almost $16000 for the summer season. To put it in perspective, that's slightly less than someone earning minimum wage in Ontario.
Posted by paulsstuff at 9:32 AM 9 comments:

If there's a limousine outside your door, you got the part. If not, go back to sleep That limousine was there." Actor Mark Ruffalo
Posted by paulsstuff at 7:00 PM 2 comments: